One Colorado State University-Pueblo state doubles as a disc jockey in his spare time while aspiring to be a professor.

Harley Westerholt does not have a DJ name unlike most on the scene because he considers DJ names to be “lame”. He said he began DJing because he loves the music and he wanted to get involved as much as possible. He has been perfecting his craft for about seven or eight years.Westerholt said he prefers house music. There are different styles of house music including progressive house, deep house, electronic house, tech house, hard house, tribal and regular.

The only style he said he won’t experiment with is hard house. He said he considers all forms of dance/electronica house.

“When people say techno, it is just a generalization to me and it is wrong,” said Westerholt. 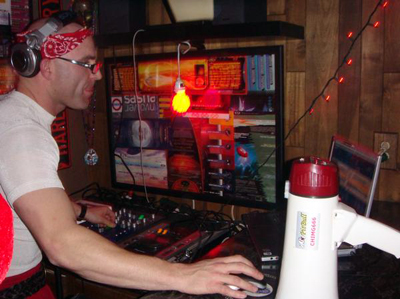 Westerholt said he was inspired by two DJs, Sasha and Dave Seaman. On a more local level, his inspiration is Ty Tek. He recalls when no one in town had house music and remembered buying tapes from Ty Tek which were a series of tapes called Teknician.

Westerholt said he would like to perform anywhere people like house music. He has performed in front of crowds of nearly 200 people. His favorite place to spin is at his annual XXX-Mas Party.

Westerholt said he would like to perform alongside DJ Fox, a member of the original Casa Del Sol crew. He considers Fox the O.G. of the Casa Del Solers. However, he said he wouldn’t mind performing on the same bill as other Casa Del Sol members such as Ty Tek.

Westerholt said he prefers using CDJs and turntables because he considers them to be more hands-on. Since times are changing, he said he loves to use digital because the beats match right away.

“The mixes are flawless and the effects are easier to add,” he said. “The DJ has to look back and forth to match a beat.”

“The turntables will always have a classic and nostalgic feel to them that can never be found when using CDJs or digital,” Westerholt said.

Westerholt’s first record was one by Left Field. The track was “Planet Funk”. Even though the record is still in his possession, it is too warped to work with anymore.

“Planet Funk” still gets the crowd moving said Westerholt and now he doesn’t have a favorite record he uses.

Westerholt said raves used to be much darker and underground. He said he no longer goes to raves because he said he remembers 14-year-olds overdosing next to him on more than one occasion.

Westerholt said he believes the reason dance/electronica isn’t as popular in the United States as the rest of the world is because America is behind on most things.

“America to me is behind in a lot of areas. We cling on a mythological religion. America freaks out on nudity. There are still Americans who wish the South would have won the war. It’s not a surprise to me that America hasn’t embraced dance music,” said Westerholt.

When not working on music, Westerholt attends Colorado State University-Pueblo. With his degree, he said he plans on becoming a professor.

He said he wants to focus on his dream to be a professor and keep music as a hobby.

“Don’t do it if you’re doing it for your DJ name and/or image,” said Westerholt. ” Do it for the love.”

This story is part of a series that will feature DJs from the Pueblo area.

Various choices to eat near campus

Celebrating 10 years with a win