If there is one local disc jockey that is constantly in the club circuit, it’s Russ Cole.

Many people might have seen Cole perform in many of the old clubs and bars in Pueblo such as Chasers, Club Lost and Evolution and at many house parties.

Cole has performed outside of Pueblo as well at places such as Mystery Night Club aka Club Misterio in Denver, Bishop’s Castle in Rye, Colo. and at the newest club in Westcliffe, Colo. The largest crowd Cole said he has performed in front of was about 300 people.

No matter where Cole performs in Colorado, he uses the moniker, Russ Hayes. He said he uses Hayes instead of his real last name in honor of his grandfather. 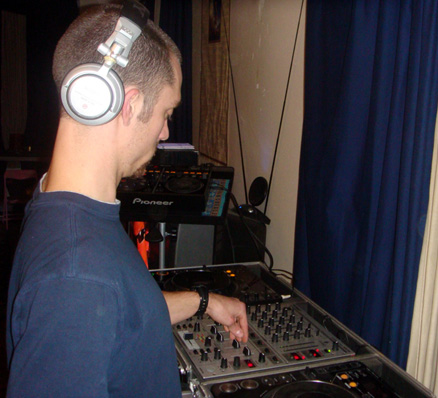 Though the local and state scene has been good to him he said he would love to perform in Ibiza, Europe and Australia.

In the 10 years that Cole has been DJing, he said he hasn’t experimented with the digital form of DJing. He said he has worked and enjoyed playing with CDJs but still prefers to use vinyl records.

With the use of vinyl in constant rotation since Cole’s humble beginnings, he said the first record he received was a gift, “The Mission” by Tom Craft.

Though “The Mission” is still in one of Cole’s many record crates, it’s time has come and gone. He said there are several records that get the crowd moving and he can’t single one out. He said he doesn’t have a favorite record to use during a set.

Cole remembers when the dance/electronica genre was at its peak. It was during the same time when he learned to become a DJ. He said he remembers going on a “treasure hunt” to find them around Colorado.

“It was much longer to get to a rave,” Cole said. “It was a whole new adventure for the whole night. It was something exciting every time.”

Cole said raves aren’t what they used to be and blames the downfall of the dance/electronica genre due to raves becoming main stream and the drug-related stereotype associated with the “rave/party” atmosphere.

Cole said the style of dance/electronica he prefers to use is progressive house. He said he was inspired by the DJs, Sasha and John Digweed.

Valentine’s Day – past and present

Library renovation is worth the wait, dean says

New Tundra Statue Coming to Campus in May