Ludacris performed to hundreds of students on April 16 at Massari Arena. The students’ state of patience was evident as they waited for him to perform. When he finally did, he kept the crowd entertained and even gave an encore. 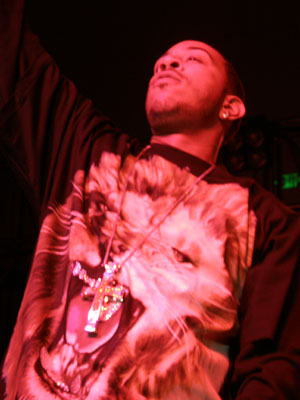 The show was opened by Kraig Brownlow, the winner of the “Battle of the Bands” competition. After a wait of almost an hour,  Ludacris finally performed.

Ludacris performed many of his hit songs such as, “Move” and “Ho”.

The arena was packed with not only students, but non-students as well.

“Having seen Kanye West my freshman year, it was nice to see another hip-hop act,” said Ray Jones, a senior majoring in mass communications.

“I liked that Luda played a lot of songs,” said Jenn Beck, a junior majoring in business management. “He stayed up there for a while. It was pretty cool.”

Nicky Damania, the director of student activities, said the numbers were not what he expected.

“I was actually expecting a lot less than the attendance that did show up, as ticket sales did not pick up until three days before the show,” he said.

“It was cool, but I expected a lot more people. I thought that the entire room could be filled,” said Aja McClellan, a junior majoring in biology.

Damania said the show was more than he expected. He said the event was better than he could have ever dreamt for because there were no incidents and everyone had a good time.

Damania said the students who sat on the special events committee this year had a goal for this year’s performance.

“We wanted to bring a performer who would be well-known and give a huge impact on our campus,” Damania said. “This goal was achieved, as the concert’s outcome was more than what we had hoped for.”

The special events committee already has goals for next year.

“Each year, a different group of students go in the committee, which will set the goals and strive for them,” Damania said. “This year, the committee already wants to set forth a couple of main events for next year. I am excited about the events they want to bring for next year.”

Information about the events has not been released.