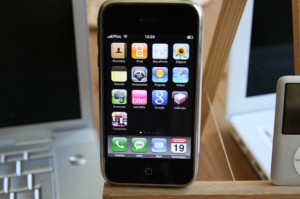 Students with iPhones or Android phones can now take advantage of the new OHHLALA app. Photo courtesy of morguefile.com />

When Associated Students’ Government President Logan Gogarty was elected, he had to decide whether or not to keep a program that offers discounts at local businesses to students.

Before the app was offered, a list of discounts could be found on the ASG website but Gogarty said it was not very effective because nobody remembered which businesses had discounts.

The creators of the app contacted ASG about offering the app to students and when Gogarty learned discounts had their own section on the app, ASG decided it would be a good way to offer deals to students while keeping the campus connected socially.

Because the deals will be more accessible to students the app will be updated often said Gogarty. The deals tab offers discounts for nightlife, entertainment and local restaurants. A map accompanies each deal along with the option to call, email, or visit the business’ website.

“Another huge problem on campus is communication,” said Gogarty “It’s harder to send campus wide emails because students get spammed with a lot of things.” On the campus wall portion of the app students can post updates and socialize. Gogarty believes this will help communication among students on campus.

Also available on the app is an events tab where upcoming campus events are displayed. One major perk of the app is that events can be added straight to the user’s calendar said Gogarty.

Settings are an important feature on the app as well Gogarty said. The user can subscribe to certain clubs, events, and updates or receive all of them.

“You don’t have to get all the things you don’t care about,” said Gogarty.

Settings on the app can be changed to protect student’s privacy. Users can set their profile to private or remain visible to other users. OOHLALA also says on its website that the data collected from users “is usually in an aggregate manner and will never include your name.”

“The more students use the app, the more effective it will be”, said Dustin Cox, ASG administrative assistant and paid intern for OOHLALA Mobile.

Cox says that there has been a couple hundred downloads of the app and the main population of the app is 19-24 year olds. “We’re working on different campaigns to draw attention to the app,” said Cox.

Along with posters advertising the app, ASG will be hosting challenges through out the year to familiarize the campus with the app.

An election challenge will be launched this week to promote students to vote this election cycle. Students can earn badges for registering to vote and voting. Cox also mentions the voting badges can be displayed on student’s Facebook pages so that their friends can see too.

The app can be found through the app store on iTunes, Google Play, and at www.campusapp.com.

Zarr and Wilson look for votes in upcoming ASG election

Creativity represented in many forms at PechaKucha night