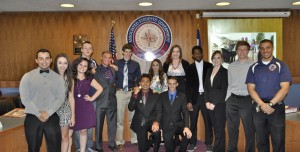 The newly elected Associated Students’ Government at CSU-Pueblo has been hard at work this summer, organizing the offices and meeting with administrators to make plans for fall.

President Timothy Zercher and his team have been updating policy manuals, clearing out obsolete files and settling old accounts before the new school year begins.  Zercher said there is a plan in progress to repaint the offices, add some new furniture and improve the aesthetics of the ASG quarters.

“We are really focused on making the ASG more approachable,” he said. “We want students to be comfortable when they visit us.  It should be a welcoming place.”

Along with the cleaning and redecorating, Zercher also said they have hired an executive assistant to help organize meetings and paperwork.  They are setting up for the election of four directors as well who will work with the ASG in specific areas of involvement.

“I want students to be aware that we’ll be having fully open applications for the director positions and they should watch for a campus-wide email from me with the details,” said Zercher.  “We’ll also announce it on social media, so they can watch our new Facebook page as well.”

Zercher has been revamping the current Facebook page and other social media accounts for the ASG, hoping to attract more student followers.  He plans to post frequent updates and important information on as many platforms as possible to make the ASG a more visible and interactive organization on campus.

Since Zercher began as an administrator on the CSU-Pueblo ASG Facebook page, the total post reach has increased over 17,000%. He plans to work on the ASG Twitter page in the near future.  He hopes that students will use social media to interact with the student government and that they will feel better connected as a result.

Another significant change that Zercher is looking forward to is the completion of the new ASG website.  It will be more user-friendly, and material such as committee reports, meeting minutes and member contact information will be accessible to everyone.  It will also be linked to all the ASG social media accounts.

Although summer is usually a season of leisure at CSU-Pueblo, the new ASG isn’t wasting any time preparing for the successful year ahead.  Students should watch for emails and social media updates about the many important projects the group is planning.

“We’re working on several events that we’ll be announcing soon,” said Zercher. “We’ll be looking for people to get involved.”

CSU-Pueblo women pull away in second half for victory