Everyone has been embarrassed by what their parents wear at some point in life. Dad’s suspenders and Mom’s cat-eye glasses were enough to make us cringe.

But we fail to realize the clothes we put our parents in now aren’t the newest style. The 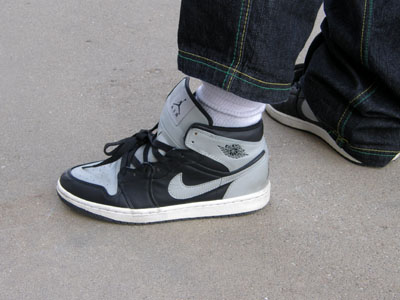 clothing styles of today have been updated over the decades to cater to a person’s sense of expression. What people dress like now, trendsetters before us have been wearing for decades.

The 1970s was a time of war, a plea for peace and the birth of tie-dye. During the decade, people rocked out to Jimi Hendrix in ripped jeans, protested former President Nixon’s actions in bell bottoms and complained about the oil crisis in the earliest forms of gothic fashions.

Clothing prices at that time weren’t bad either. According to thepeoplehistory.com, a man could get a warm winter jacket for $19 and a woman could get a dress shawl for a under $5.

Circumstances aren’t that different now. We wear ripped jeans while we rock out to Jimi Hendrix and Plain White T’s. We protested former President Bush’s actions in bell bottoms, known as flares. We still complain about the oil crisis in gothic fashions, which today have evolved into the “emo” style.

In the 1980s, Apple Inc. made a creepy commercial, the Cabbage Patch dolls became the new annoying toy and Princess Diana was considered the people’s princess. Young professionals dressed for success, Nike shoes became an icon and it was ok to wear your workout clothes out of the gym.

Clothing prices were still reasonable, but if you wanted a nice garment, you paid the price. According to thepeoplehistory.com, a men’s cashmere coat was $189, a suit was $189 and the first Nike Air Force basketball shoes were $54.90.

Not much has changed in 20 years. People still wear some sort of suit set to work, which either has a skirt or dress pants for ladies and dress pants for men. A nice business suit now could set you back a few hundred dollars.

A person can buy a good pair of Nike Air Force Ones for almost $200, with some styles setting customers back a couple thousand. The shoe was even mentioned in hip-hop artist Nelly’s song “Air Force One.” Since then, the shoe’s sales have been high, becoming a staple to hip-hop and R&B artists.

Work out clothing has unfortunately made its way into mainstream fashion. Many people like to wear their sweats, class reunion t-shirts and cross trainers in places other than the gym like the movie theater, places of worship and even nice restaurants.

Workout wear has gotten a little nicer this time around. Women are wearing velours or leisures, sweat suits that are made from a velvet-like fabric and are nicer than the typical gym uniform. Juicy Couture, a high-end boutique, capitalized on this trend, selling track suits that set a girl looking for comfort back almost $200.

The 1990s gave birth to Homer Simpson’s first, “Doh!,” Nintendo’s Game Boy was the cool toy that replaced the sorry Cabbage Patch doll and Nelson Mandela was a savior to many Africans.

The decade brought back dreadlocks, platform shoes and miniskirts. It’s not hard to miss someone wearing these trends now.

Hip-Hop artists like Jermaine Dupri and Will.i.am are famous for their dreadlocks. Dreds aren’t the sign of an unclean person anymore. Many professionals are wearing them and employers have guidelines to how long they can be.

Remember the Spice Girls? Their platform shoes were 15 centimeters at the highest. How they performed in them is a mystery, but this decade’s platform shoes are more subtle. Christian Louboutin’s platform heels are less than an inch high, and are hidden inside of the sole so the shoe doesn’t look like a “stripper shoe”.

A miniskirt is a girl’s summer staple. It doesn’t matter if she’s headed to the beach or the mall, if she wants to show some leg, this is how she’ll do it. Alicia Silverstone wore one in almost every scene in the movie “Clueless,” and has passed the torch to other teen movies like “Mean Girls.”

Lots of fashions are repeated every decade. With every repetition the trends get better, the memories are funnier and more people try to wear their own version of the current style. It’s interesting to think about how far in fashion history we’ll go. Maybe our crazy dressing parents really do know a thing or two about fashion after all.

Fans hop on the Bandwagon as teams continue to lose