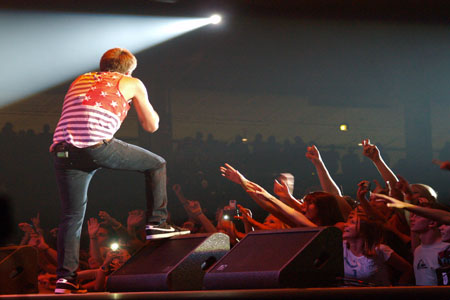 The size of last night’s audience at the 3OH!3 show might have been saying, “Don’t Trust Me,” but the security guards loosened the “Chokechain,” they had on the crowd and let them be “Starstrukk.”

“It’s going to be a really rowdy show tonight. A lot of kids,” said Loretta Sanchez, a security guard for the Colorado State Fairgrounds Event Center. “[We are] just making sure that kids don’t get hurt, there’s no fights. Everything is pretty much safe and under control.”

No fights were apparent in the venue.

The show was shorter than what was advertised on the Colorado State University – Pueblo Web site, which said the show was to end at 11 p.m., not end abruptly after 10.

Some people in the audience were confused about the show ending earlier than originally planned. Once the house lights came on and the audience was realized the band wasn’t doing an encore, echoes of, “That was it?” and “That was a short show,” were heard throughout the crowd.

None of this mattered to Taylor Branch, a sophomore in the computer information systems program at CSU-Pueblo.

“I saw them at Warped Tour a couple of years ago so it’s pretty nice to see, to follow up, and they come to different events,” Branch said. “[It’s cool] just to see how they’ve improved in the last couple of years and I just like their music, so it’s fun all around.”

Zav Dadabhoy, the dean of student life and activities at CSU-Pueblo, said he does not yet have the figures for the show.

“I don’t have a final count of everybody who showed up, what the total ticket sales were. But my understanding is that for this event, we actually made a profit. I can’t tell how much [money we made] for at least a week,” Dadabhoy said

Behind the scenes with the ThunderWolves Dance Team