The pillar of the community is all that stood, nearly unscathed. The grain elevator that for many years was filled during harvest showing the prosperity of the community is now alone. The tall white structure resembles Lot’s wife, a pillar of salt, she looked back at the cities as they were being destroyed.

The grain elevator overlooks the rubble, the streets are still quiet. No school children on bikes, only an occasional car and faint hum of distant construction. Yards are draped with gloomy bare trees, a piece of fabric lodged on a limb whips in the wind. The monotonous creak from partially detached branches dangling from destroyed trees creates an eerie empty feeling. A whole town wiped out.

The concrete landmark of rural Kansas towns proved its stability and gave people what little hope they could muster as they emerged from rubble the morning of May 5, 2007. The evening prior, storms brewed in southern Kansas. They not only brewed, they hit, they pounded and they destroyed.

A single, two-mile wide tornado demolished homes, the hospital, vehicles, 100-year-old trees, streetlights, historic buildings, and more. The tornado hit at 7:59 p.m. Dark clouds swirled in the sky as the sun set to the west.

Hail came in the worst way. It always starts little, like tiny balls shooting from the sky hitting cars with a ping; however, this night was different. The hail did not actually stop at anytime, it grew. Much larger than softballs, so heavy they landed with a painful thud.

One man loaded up his family in his newly restored canary yellow ‘78 Ford tuck and headed for the Phillips 66 to find protection and avoid further damage under the awning. The three-block drive became a nightmare that will forever be fixed in their memories. Half a block from the filling station, a white truck branded with red letters was flying through the air; he had enough time to read Ryder and ducked before it slammed into the driver’s side door. His wife and young son were curled up on the floor boards. They were fortunate and they all survived.

His family suffered minor injuries. His son had a few glass shards in the back of his head. The man was whipped by the rubber window seal that furiously pummeled him in the wind. Somehow, he managed to get a gash on his thumb. He is scheduled to have surgery soon. He said his wife was OK, a foreign object pierced her leg. The object was a kernel of corn embedded two inches deep.

The kernel of corn was not the only thing buried that night. Greensburg, Kan., was gone. The town once took pride in having “The World’s Largest Hand Dug Well.” The well cannot be found and the monumental water tower that stood over the big hole was a mangled pile of steel. The World’s Second Largest Pallasite Meteorite weighing 1,000 pounds was found; it had been uprooted from it’s location in the gift shop by the well. Much of the town was a contorted mess.

“Twelve of us gathered in a neighbor’s basement on the south side of town,” Matt Dighton said. “It was loud. The pressure from the tornado was so great, it hurt. I lost 25 percent of my hearing.”

Dighton was one of the first to get out of the basement. Another neighbor’s refrigerator blockaded the staircase of the home he was in, creating a nearly insurmountable barrier. When he emerged from the rubble it was pitch black and silent. Dighton looked around and saw nothing. He said the sky suddenly lit up with a natural light, the kind that is followed by a huge clash of bone-chilling thunder. He had a glimpse of the devastation, a flicker of the disarray.

Of 1,700 homes in Greensburg, 961 were destroyed, 105 had major damage and 67 minor damage. Eleven were categorized as affected, meaning broken windows, missing shingles and gutters. Businesses were also impaired, 110 with major damage, and 24 with minor damage. The total estimate of insured damage was more than $153 million. Several homes were not insured for their market value.

Sara Schmidt, 80, lost more than her home; her husband was killed by a pick-up truck that landed on him in their house.

“He never liked to sit in the dark,” she said as tears filled her eyes. “We went to the basement when the sirens went off, and he went to get a flashlight.”

Schmidt continued and described the tragic events as she remembered the night.

“It picked him up and took him across the room,” Schmidt said. “I was by the water heater. It took 12 men to get him out from under a flat bed truck.”

The silver color of her hair was vibrant in the January sun as this community matriarch struggled to tell her story.

Schmidt’s home facing Main Street was on a corner, before the storm. However, after the destruction, it was cockeyed half in the neighbor’s yard on Grant Street.

“The neighbors wanted us to have it cleaned up within 48 hours of the storm; the kids didn’t have a chance to save anything,” Schmidt said. I was in the hospital with my husband, he lived 10 days. I lost everything.”

“It’s been sitting here since November, until this week. The weather’s been cold and windy. I can’t thank them enough,” Schmidt said as tears came to her eyes again.
Eight months after the tornado, the town remains under construction.

“Every team that comes is a miracle. This week we are in need of concrete work, they brought people experienced with concrete,” James Bond said, the operations manager for South Central Kansas Tornado Relief Operation.

Christian denominations have come from across the country to continue the work of relief organizations that left town several months after the tornado hit. According to Bond, mental and spiritual counsel are just as important as rebuilding the town.

“Listen to their stories, each time they tell them they heal a little more,” Bond said. Your time with these people is just as important as the work you do while you’re here.”
Bruised knees, sore muscles and a few yellow paint chips on the toes of their shoes may be all the group from Rye, Colo., has to show from their time in Greensburg, but their trip meant much more.

“Every little bit helps. We went to one house and the guy didn’t have a lot for us to do but, he was still very appreciative,” Leah Melby, 22, of Rye said. “If my schedule allows I’d come back to help again.”

Greensburg provides the perfect opportunity for people to lend a hand. Every skill level is welcome. The patience of the leaders and kindness of the volunteers is amazing coordinator of the mission team from Rye, Shylo Dennison said. Teams from across the country are scheduled to head to this small farming community and continue the relief projects.

The grain elevator, the lonely white pillar stands powerless, watching over what is left. First the storm, then the tears, the families leaving, more than 20,240 dump trucks hauling debris passed, and now the progress. A curtain dangling from a tree for nearly nine months continues to blow in the constant Kansas breeze. The trees continue to creak and the hum of construction will be faintly heard for several years.

Editor’s note: CSU-Pueblo student DeAnna Power was among a group from Rye Home Methodist Church that traveled to Greensburg, Kan., earlier this semester to help with clean-up and recovery efforts. 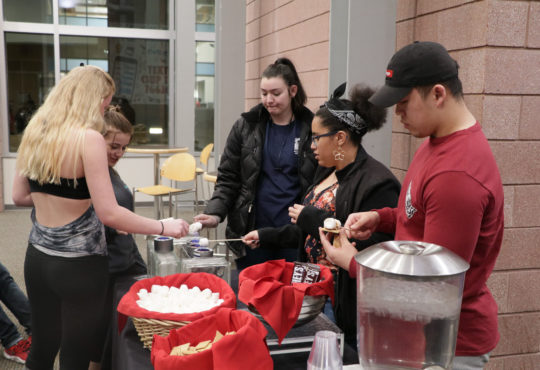 Next steps for marijuana law being taken

Fundraiser, blood-drive at CSU-Pueblo for Haiti