An overview of how the faculty members of the CSU-Pueblo Foundation, President’s Leadership Program and CSU-Pueblo Alumni Association work together, collaborate and function as a unit at the university.

Jennifer Denton, manager of gifts and records of the CSU-Pueblo Foundation, said a few goals of comparison between each entity are to keep data about private donors, communicate effectively about alumni and people of the Pueblo, Colo., community donate money to the CSU-Pueblo Foundation. The faculty members of the entities work in conjunction, to prioritize goals to maintain the organizations.

She said a purpose of the business relationship is to communicate with donors, alumni and members of the community.

Denton said an example of miscommunication was if alumni relocated to a different city or changed marital status, but received mail from the alumni association.

“If we don’t coordinate our activities, if we don’t share information or share resources, we can appear to be uncoordinated, discombobulated and not very professional,” Denton said.

She said also the entities work on similar work tasks too.

Samora said the President’s Leadership Program registers students who desire to learn about leadership. She also said she praises the program Moreschini recruits students to gain interests and become leaders of the university.

Samora said she tells Potestio about the process of how she plans activities for the alumni association. She also said Potestio gives her feedback about how to proceed with the ideas of the activities.

Meanwhile, Denton said Potestio report to the president of the university about the progress of the foundation office. She said a few points Potestio discusses with the president are in regards to money raised from events, developed support from people in the community and entrusting the people who donate money.

However, Denton said Samora and Rochelle Moreschini, director of the President’s Leadership Program, are helpful when it is important to plan events.

Denton said an event she helps Samora organize is CSU-Pueblo football tailgate parties. She said she may help Samora carry coolers full of beverages or count money donations. Samora said tailgates are organized and planned before football games by the alumni association, which also consists of some alumni.

Samora said an annual event called Reunion on Union also integrated alumni in the CSU-Pueblo community. She said about 170 people reunited and socialized about their lives after they graduated from the university.

Another goal of the CSU-Pueblo Foundation Office was, Denton said, to persuade private donors to grant money at fundraising events to financially support the foundation office.

The Annual Fund, Samora said, is a fundraiser that involves alumni. She said direct mail is sent to about 35,000 alumni. Also, Samora said the motive is to ask alumni to donate money to the fund. However, she said it is important to inform the alumni and re-engage them about the recent developments on campus.

Denton said another reason the entities work together is because of donors who are willing to donate money at fundraising events essentially helps the office. “We work as a team in order to get the highest number of dollars for the university,” she said.

In addition, Denton said CSU-Pueblo Foundation plans fundraising events for sponsorships and grant money. She said the President’s Scholarship Gala is annual and invitations are sent to members of the community, vendors of the university and private donors. She said that on May 22—the Gala provided opportunities for attendees to donate money for scholarships.

“The whole point is to raise as much money as we can for scholarships,” Denton said. An important point she also said was the proceeds from the Gala supports the President’s Leadership Program.

Samora said the CSU-Pueblo Alumni Association was also involved with the President’s Leadership Gala. She said also the association had to sell sponsorships on tables because the funds supported the event. She also said was on the publicity committee, which she notified people information about the gala. 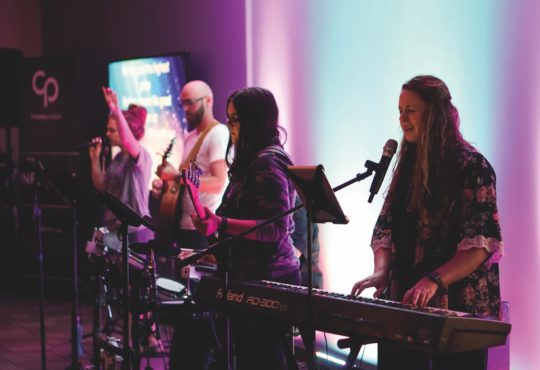