The Pueblo Children’s Chorale delighted a crowd that filled Hoag Hall Sunday, Dec. 4, with their arrangements of the Christmas classics. 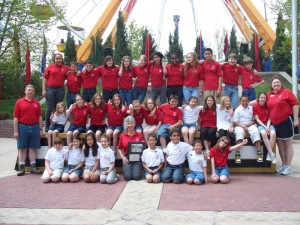 The Pueblo Children’s Chorale performed for the CSU-Pueblo community Sunday, Dec. 4, as the first stop of their winter season. Photo courtesy of pueblochildrenschorale.weebly.com.

The chorale is in the middle of its 16th season and has fittingly entitled their winter performance “Sweet Sixteen Winter Concert.”

The small children’s voices sang with a unified voice and harmonious tone that warmed the hearts of their parents and those in attendance. They sang classic Christmas songs such as, “A Canon of Praise” and “One Candle,” before moving into a medley of Christmas carols. For the finale, executive director Christina Anderson invited alumni members of the chorale to join in the performance of “Shalom.”

The program at the event had a section with messages from the graduates, all praising and thanking the chorale for their experience.

“Being a member of the Children’s Chorale was one of the greatest experiences in my life. It has helped me to find some of the roads I want to follow as a career,” said Brittany Allison, a 2000 graduate.

There were also guest performances by members of Sarah Shaw’s Dance Studio, whom delighted the crowd with a number of lively performances. The young artists showcased their talent and dedication that they’ve had to put into their routines for the past year.

The dances ranged from energetic tap-dancing to modern hip-hop styles to the beautiful ballet, all set to modified versions of traditional Christmas songs.

Anderson highlighted the importance of partnerships between the local dance and arts organizations in Pueblo. Each organization hosts other clubs to participate in their events, giving each club additional exposure to the community, she said.

The Children’s Chorale has started to promote a new fundraiser, which allows a group of five or six members sent out as Christmas grams, Anderson said. For $25 the children will travel to an individual’s home, office or nursing home and sing a medley of Christmas carols.

The chorale is directed by Brook Mead, who is an alumnus of the University of Southern Colorado (CSU-Pueblo). Mead is a new director for the chorale and also serves as the vocal music director at Centennial High School. He also performs in the local band, Martini Shot.

The Children’s Chorale has strong ties to the CSU-Pueblo alumni network.  Zachary Friberg, a graduate of CSU-Pueblo in which he majored in music performance with a vocal emphasis, serves as the associate director. Friberg also teaches acting, vocal music and musical theatre at the Sangre de Cristo Art Center Academy.

Lori Judkins, the chorale’s accompanist, holds a bachelor’s degree in music education and is an alumnus of CSU-Pueblo. She has served as an accompanist for South High School, Central High School and the Roberta Arwood Voice Studio. She has also performed for her church for over 25 years.

The winter concert is second in the group’s three-concert season. The chorale will be guest performers April 6, 2012, at the Old Towne Carriage House with the Ugandan Orphans Children’s Choir.  The final performance for the 2011-2012 season will be May 5, 2012, at Hoag Hall.

The 39-member group welcomes performers between the second and eighth grades. The chorale holds auditions in September and January, and for those who are interested in auditioning or would like more information, contact Anderson at 719-546-2309.

SEAL office changes policy for college night at the movies

Students showcase their talents in competition

And down the stretch they come