The Minneapolis, Minn. resident played at 7 p.m. Although the crowd was small they seemed to be thoroughly enjoying the concert, clapping after each song. 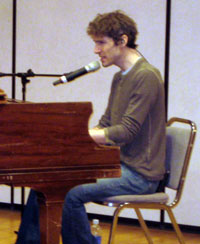 Steinman was brought to CSU-Pueblo by the Office of Student Activities. This was his first concert on the campus, Alicia Beaver said, Entertainment Chair for the OSA.

She also said the independently signed artist, who has been compared with Jason Mraz, has played throughout the nation at festivals, Carnegie Hall, and in Europe.

The OSA is making an effort to bring concerts to the campus, hoping to draw an audience particularly from the substantial number of CSU-Pueblo music majors.

The concert was free to students with their student identification card. 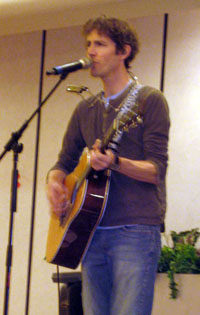 on the acoustic guitar and adding a harmonica to several of the songs. He had written many of the songs, some of which are found on his current album, “Things to keep in Mind While Balancing.”

He said he hopes to record a few of the other songs he played on a new album in the near future.

After playing his guitar, he moved to the piano where he played some songs recorded by other artists, including tunes by Coldplay, Bob Dylan and Ben Folds.

He later returned to the guitar to play songs he had written for, or while dating, his wife.

His pop style music combined with a little country feel provided an enjoyable evening for attendees as well as people who heard the music and drifted in.

Broadwell knows how to lead

Students may be looking at longer semester