Accustomed to singing in front of more than 3,000 people, Humphrey, a former CSU-Pueblo student, performed in front of a crowd of about 40 people.

“I was hoping there would be more audience members and students,” Humphrey said. “There were very few. I was a little surprised by that.”

Barbara Beck, an artist in residence of the Music Department, shared the same insight as Humphrey regarding attendance.

“I wish more of our students had been here,” Beck said.

The first and last songs of his performance were in Italian, while the rest of the first half of his program was performed in German and Russian. Humphrey switched to English for a “lighter” second half after intermission.

Among the repertoire that he sang, Humphrey said the Cole Porter set was his favorite; the “Tale of the Oyster,” in particular.

“The ‘Tale of the Oyster’, I just adore. I think that’s just a great song,” Humphrey said.”The audience really seemed to enjoy it too. That was pretty cool.”

He said he also liked singing “Lions” and “Some Sheep are Loving,” both art songs composed by Hundley, as well as “Der Dopplegänger,” composed by Schubert. 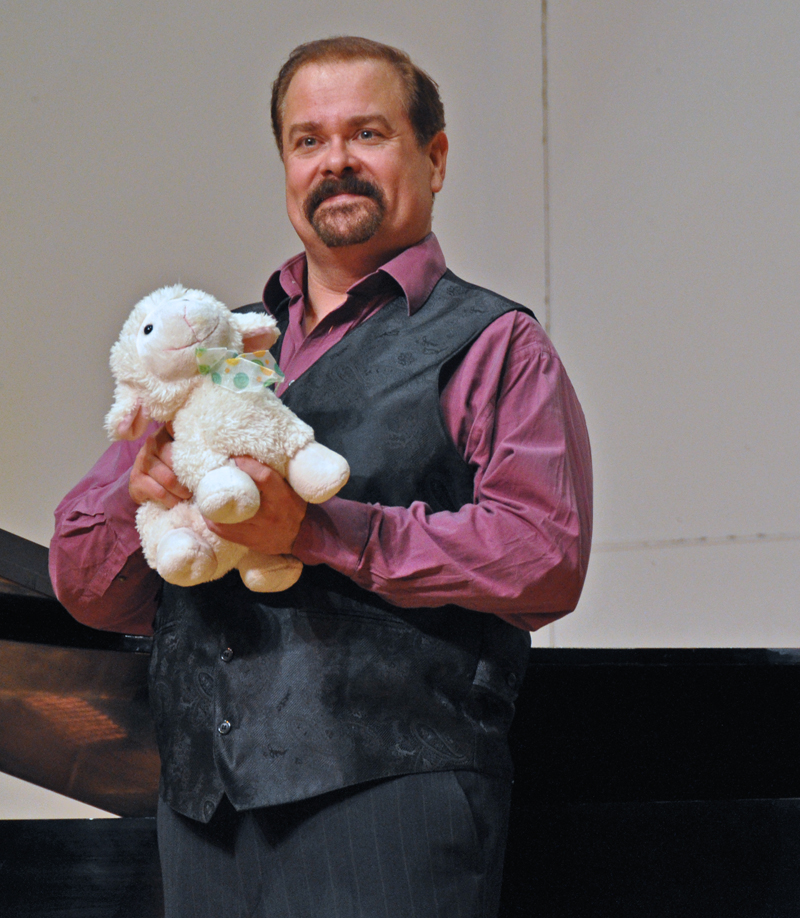 Humphrey holds and interacts with his niece's stuffed animal sheep while on stage singing, "Some Sheep Are Loving." Photo by Zak Bratton

For “Some Sheep are Loving,” Humphrey held a sheep stuffed animal while walking around the stage and singing. While he would have liked to take credit for the idea, he said it was his sister who urged him to hold the sheep during the song.

Even though Humphrey said he enjoyed singing the English pieces of Hundley and Porter the most for this concert, he said opera is still his passion when it comes to performing.

“I like opera, I really do,” Humphrey said. “You get to act, and you get to sing with a big orchestra and you get to put on a costume with three to four thousand people watching you.”

He said he felt the performance went well, although his “memory slip” in “Don’t Fence Me In” by Porter, flabbergasted the tenor.

“What? What? How did that happen?” Humphrey said, laughing. “I sung thousands and thousands of words, and I mess up on ‘Don’t Fence Me In’? Embarrassing.”

Beck, who played the piano and provided accompaniment, also expressed criticism of her own performance; although she said she’s “almost always” hard on herself.

“I thought I did pretty well in the first half. I wish I would have done better on some things but I was happy with the first half,” Beck said. “There was too much going on in my head but I enjoyed playing. I just wish I had done better than I did … I just didn’t want to let him down,” Beck said.

Contrary to Humphrey, Beck said she enjoyed performing the Rachmaninoff set the most. She said her favorite piece was “How Fair This Spot.”

“I’ve always been really fond of it,” Beck said. “My mother used to sing it, and there’s just something about the melody and the way the piano and voice just weave in and out.”

Impressed by his performance, Beck said Humphrey “did an extraordinary job.”

“I’m really hoping that we can get him back here,” Beck said. “I think it’d be really great to have him back. I think he’s a fine performer.”

After the final song, “Nessun dorma” by Puccini, was performed, the small audience clapped and gave Humphrey a standing ovation. He answered by singing “E lucevan le stelle,” also by Puccini, as an encore.

Although the crowd was not what he expected, Humphrey said the energy and excitement of the audience made the performance worthwhile.

“I was happy that the audience was so enthusiastic,” he said. “It can be a small audience and still be appreciative.”

Though he makes his living as an operatic singer, Humphrey’s musical career wasn’t always centered on vocal performance. He started out as a pianist who did absolutely no singing.

Although he was born in Trinidad, Colo., Humphrey was raised in Pueblo. While attending Central High School, he was asked to be a part of the orchestra reduction. The choral director, Richard Martin, took a group of students to perform in Europe, something that occurred every summer. Martin asked Humphrey to go on the trip to play piano, but he also wanted him to sing.

A few days later, Martin repeatedly asked Humphrey if he would consider performing with the chorus, but again, Humphrey denied. Martin asked him a third and fourth time before Humphrey agreed. After that, Martin tested Humphrey’s singing ability.

“We went down to the chorus room, and he played a note and he said, ‘Match this pitch,’” Humphrey said. “Then he told me how to learn a musical line, and he said, ‘Why don’t you just learn this song and bring it back when you’ve got it learned.’”

The next day, Humphrey said he performed the song for Martin with considerable ease. After that, Humphrey’s vocal career took off. He auditioned and earned a spot on both the all-city and all-state choir, and continued to sing as a tenor throughout his senior year at Central High School.

Humphrey now lives in Munich, Germany, and has become nationally recognized for his performances there. He has performed as Don Ottavio in “Don Giovanni,” Count Almaviva in “The Barber of Seville” and Don José in “Carmen.”

His most recent performance was the role of Bacchus in the opera “Ariadne auf Naxos” by Richard Strauss.

Humphrey’s next performance in the U.S. will be on Nov. 7 in Elk Grove, a suburb of Chicago. He will sing with an orchestra following the performance of the Austrian Mixed Chorus. Humphrey said he was previously the director of the chorus, which invited him back this year to perform with them in the gala concert.

After that, Humphrey will fly back home to Munich and perform in operas where he will reprise lead roles. He is also scheduled to perform in Germany, Ireland and South Africa in 2010.