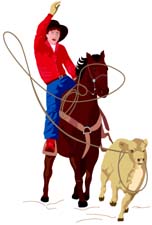 One of the best things about attending CSU-Pueblo is the number of clubs available for students to get involved in.  Currently, CSU-Pueblo hosts more than a dozen clubs and a variety of club interests including everything from English to film making to rodeo competition.

After years of being inactive, the Rodeo Club has been reestablished on campus by Alexandra Hyland. Hyland competed throughout high school in rodeo events and has held several rodeo queen titles.

She recently transferred to CSU-Pueblo and said that she was quite surprised when she learned that the university did not have an active Rodeo Club.

“Pueblo is big rodeo country so I was actually surprised,” she said.

Hyland sees great potential  in CSU-Pueblo students and plans to recruit enough people for the club to compete in the Spring 2015 season.

“I am so excited for the club to be up and running,” Hyland said. “I truly do believe that CSU-Pueblo has the potential to compete in the NICA (National Intercollegiate Rodeo Association).”

Experience will be necessary to be considered an active member of the Rodeo Club because the members will be competing at an intercollegiate level and they must be able to provide their own horse, tack and equipment.

“I truly want this team to be a success and become a competitive team again,” Hyland said.

She plans to establish a general membership meeting in the upcoming weeks once she has a better idea of how many students will be interested in becoming an active part of the club.