Editor’s Note: CSU-Pueblo student Nick Isenhart submitted this story to the TODAY about the recent academic and creative writing contest.

The seventh annual Across-Curriculum Academic and Creative Writing Contests awards banquet on April 14 proved to be a hit with a record-tying number of entries.

This year’s event, which was sponsored by the CSU-Pueblo English Club and the Office of Student Activities, drew 41 entries from lower division, upper division and English Composition students in a wide variety of departments including history, chemistry/physics, psychology and English.

Constance Little, the English Club faculty sponsor, said she would like to see 60 or more entries next year.

“This is one of the most important things we do here at this university,” CSU-Pueblo Provost Russ Meyer said. 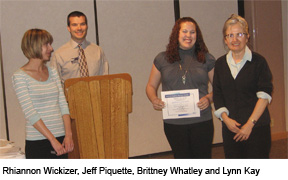 it had been assigned and turned in, and was sponsored by a faculty member.

Aubree Alley won third place in lower division with “Determining the Amount of Horsepower It Takes a Person to Walk and Run”.

First place was awarded to Brittney Whatley for her paper “The Economy Hits Rock Bottom”. Second place was given to Jazmine Wells for “Body Exposure: Analyzing the Unequal Portrayal of Comic Book Characters”. Third place was given to Chloe Mulligan’s “Convenience turned Negligent?”.

Adam Jones was awarded first place in the upper division for “The Gospel from Outer Space: The Christian Ideology in Fiction from James to Vonnegut,”.

The contest was sponsored by Juan Morales and the Creative Writing Program, which also sponsors poetry readings, a weekly writing workshop and produces the campus literary publication, Tempered Steel.