It is only a matter of time before a new dean is selected for the College of Science and Mathematics at Colorado State University-Pueblo.

Public interviews have been conducted. The last of which was with Richard Kreminski, Ph.D., who is currently teaching at Texas A&M University.

Some of his accomplishments in the mathematics world include improving an algorithm to calculate Pi, or a representation of an infinite number used in calculating circles. With his improvement, he has been able to calculate 308,000 digits of Pi. He said that would have been the record in 1966. 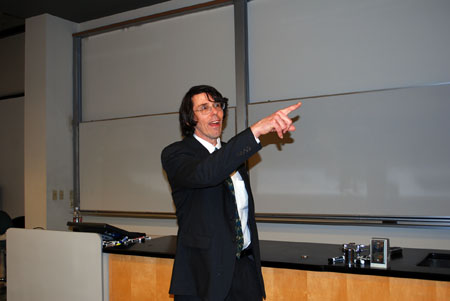 Kreminski comes to CSU-Pueblo with nearly 20 years of experience teaching math, one year as interim dean and three years as assistant dean, but he said he feels it is time for him to take a position as a dean.

“A lot of people don’t realize deans do a lot of things,” Kreminski said.

He said he believes there isn’t one role of a dean.

The most important thing to remember as dean, he said, was to do no harm.

Kreminski said he thinks deans and administrators should serve, doing whatever possible to help faculty and students, while helping the university progress as well. He also said as dean he plans to support programs, help with strategic planning, be fair, and enthused.

This includes getting to know the faculty at their convenience in order to get to know them, understand their aspirations, goals and ideas, he said. He also said he believes knowing the students and staff is important.

It is really important to find out what they think the strengths are and for the dean to know what’s working so they don’t change things that are working well already, Kreminski said.

If the department already has goals and visions you want to help them achieve those goals, he said.

“I think that universities should be major areas of experimentation and incubators of really good ideas,” he said.

Students who are not math and science majors need to have a general appreciation and understanding of math and science because the world is increasingly dependent on those two for solutions, Kreminski said.

Recently, an article in The Wall Street Journal stated that mathematician is the top ranked career to have out of 200, and math and science-based fields filling out most of the top 20.

He said he has some experience getting grant funding, and while he said he does not know much about how to acquire stimulus package money, he believes that is an important financial line to tap.

Kreminski said the biology and chemistry students at CSU-Pueblo seem to be involved in undergraduate research and faculty doing active work of regional importance. He did note the lack of math majors compared to biology or chemistry, as well as noting a seemingly high attrition rate, based on the Web site.

“I don’t hold that against them,” he said, “you can only tell so much from a Web site.”

Kreminski is currently working at Texas A&M University, where 12 out of 13 academic departments he oversaw as interim dean have a Master’s program. He said he is very supportive of a graduate degree program.

“I think there’s a large enough population base here to have a Master’s program,” Kreminski said.

“Colorado Springs has almost half a million people live in that city and they seem only to have Colorado College, and University of Colorado-Colorado Springs, which is not that much bigger than you guys so where are all those people going to college?” Kreminski asked. “They could come to Pueblo.”

He even proposed the possibility of using the satellite building in Colorado Springs as a site for growth for a graduate degree program.

“I think it’s really important for universities to help the community in various ways,” Kreminski said.

He said he has been personally involved in educational outreach in high school, middle school and elementary schools. He also discussed some difficulties with student responses for service learning experiences.

It is part of the dean’s responsibility to help with writing grants, but the faculty needs to be involved in the process too, Kreminski said.

He has written some grant requests, and while he admits one was not approved, he said he has learned what to do differently.

He said in his time as interim dean he wrestled with how to deal with a $50,000 budget cut, but he said he did it without firing anyone while funding undergraduate research and more.

The minority population at Texas A&M is about 20 percent, Kreminski said, with approximately 10 percent being Hispanic. He said most of the outreach programs he is involved in are for the financially destitute, regardless of race.

Kreminski said he has personally worked directly with minority students in outreach programs, such as the Infinity Institute.

The Infinity Institute is a four week math and science camp for rural and economically disadvantaged kids. He said some of them are minorities, but that is not part of the criteria.

The students who attend the Infinity Institute are high-aptitude kids from small schools without the capability of providing the higher level of education, Kreminski explained. He said many of these students are graduating high school and are first-generation college students.

As far as his role as dean, Kreminski said he would like to teach when he could if he was hired as dean of the College of Science and Mathematics at CSU-Pueblo.

“I think it’s important for administrators to keep in touch with students,” he said.

Kreminski recently finished his Juris Doctorate in Law. He said he is interested in intellectual property issues and human rights.

While Kreminski said he is applying to several different places, CSU-Pueblo is the only university in Colorado he has applied to. He said he believes there is a lot of opportunity for growth, especially with environmental work such as the solar panels.

“I like public regional universities. I think public regionals do change lives. I like working with students who are first-generation,” Kreminski said. “You can really affect the community in profound ways.”