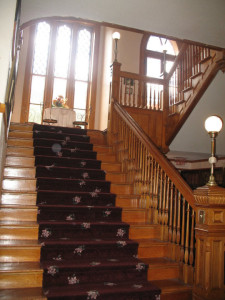 Halloween is still a few months away, but if you like your haunts authentic and year-round you’ll want to check out some of these places in Southern Colorado.

Get your ghost tour started off right with one of the most haunted places in America, Brairhurst Manor Estate, located in Manitou Springs.

This historic residence attracted national attention when it was featured on a show called “Ghost Hunters” on the ScyFy Network in 2009.  Earlier visitors have said that they have seen unexplained images, shadows at night and sounds from past generations that can’t be accounted for.

According to the estate’s directors of historic and paranormal research, Erik and Tammila Wright, guests experience things like “vases flying across the room, silverware spinning on plates and things grabbing you that you can’t see.”

The minute visitors arrive in the grand parlor, there is a winding staircase that stands out, but sometimes other things will catch their attention such as “children running across the staircase and bouncing a ball downstairs and then just disappearing,” Erik said.

This is just the tip of the iceberg when it comes to ghostly activity at the estate. Reports of the unexplained from past guests and the paranormal atmosphere have made an impression on visitors for a number of decades.

The next place you may want to check out on your ghost tour is the Miramont Castle in Manitou Springs.

The castle was built in 1895 by a priest for himself and his mother. It was used as a tuberculosis sanitarium at the turn of 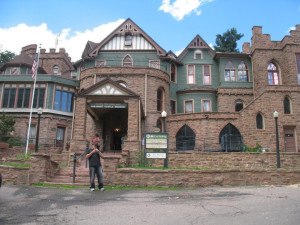 the century and has also been used as a retreat for retired clergy.

Many people in town believe there are dozens of spirits that haunt its halls. The people that know the castle well also believe that some of the spirits of those who actually lived in the castle over the years have stayed.

Numerous people have reported seeing a couple walk down the main staircase clothed in Victorian clothing. Footsteps are often heard on the stairs, when there is no one there.

A little girl and boy have been seen in the gift shop on several occasions. The girl was seen holding a doll in the doll display room, and when the gift shop employee asked her to put it down and find her mother, instead the girl disappeared.

Employees also report that the reflection of a woman has been seen in the mirror of the 16-sided bedroom, along with other strange happenings such as things being moved or flying off shelves, lights turning on and off and doors being opened and closed.  Each time, no one is ever found in the area.

One more stop you should add to your ghost tour is the old hospital in Colorado Springs at Institute and Pike Peak.  It’s about 100 years old and has been closed since 2010.  It now sits abandoned and up for sale.

There are rumors of activity on the second floor like the sounds creaking of bedsprings, wheelchairs rolling in the halls, muffled conversations and shadows lurking behind the glass windowed doors in the dark.  Yet there are no beds or wheelchairs left in the building.

An old patient recalls waiting alone in an examination room and seeing a little girl playing “peek-a-boo” with her at the door and looking like she wanted her to follow her.  After her doctor visit, the patient asked if she could go play with the little girl, but she was told that she was the only child patient that day.

Other visitors to the hospital have seen apparitions of doctors from the waist down in doorways and have heard conversations and even screams of sick people who never left the hospital.

So if you plan to take a Southern Colorado ghost tour, be sure to include these three places.  They will have you spooked, to say the least.

Check them out for yourself, if you dare.

Walking to a healthier, happier me